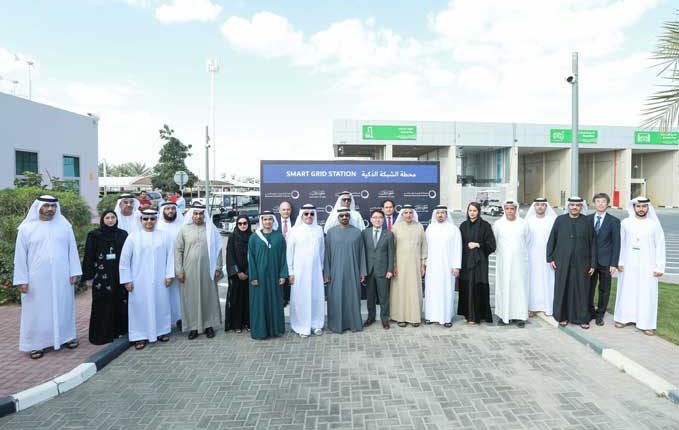 The SGS comprises a 200-kilowatt (kW) photovoltaic solar power production system; a 9-kilowatt (kW) wind turbine; and a 500-kilowatt hour (kWh) lithium-ion battery energy storage system, which stores energy for later use. The station also includes over 2,000 sensors based on the Internet of Things (IoT) technology, and smart meters distributed throughout the facility to monitor power and water demand data in real-time for the purpose of improved energy and water management, with the potential to reduce demand when required by eliminating non-critical loads through smart lighting, smart power outlets, and smart air conditioning system.

The SGS is also integrated with a smart chiller system through a building management system, and a 100-tonne thermal energy storage system, which stores surplus cooling energy to be used when required, thereby reducing the demand on the smart chiller system.

His Highness was briefed by HE Saeed Mohammed Al Tayer, MD & CEO of DEWA on the various sections of the SGS.

The SGS concept is scalable and allows for the development of individual smart buildings, groups of smart buildings and smart areas, which ensures the efficient reduction of electricity and water consumption as well as carbon emissions, thereby becoming a smart city.

“We are working to achieve the vision of His Highness Sheikh Mohammed bin Rashid Al Maktoum to make Dubai the smartest and happiest city in the world, as well as the objectives of UAE Centennial 2071, UAE Vision 2021, and the Dubai Plan 2021 to make Dubai a smart and sustainable city and for the Dubai Government to be a pioneering and excellent government. In line with our vision of being a leading sustainable innovative global corporation, we seek to shape the future of the energy sector locally, regionally, and globally through government innovation by keeping pace with the Fourth Industrial Revolution and adopting innovative, disruptive techniques, such as artificial intelligence, IoT, robotics, and 3D printing,” said Al Tayer.

Smartworld and Honeywell partner for smart buildings in UAE