The Tech Taxi initiative offers digital services that support the smart city drive, under which the e-hailing taxi service ‘Hala’ in conjunction with Careem was launched last week. 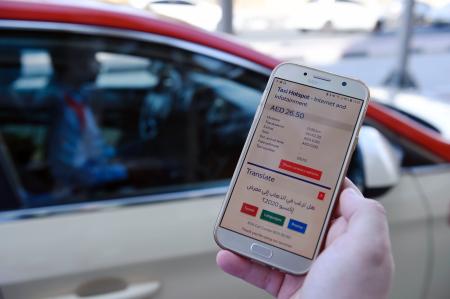 Dubai’s Roads and Transport Authority (RTA) has begun the implementation of ‘Tech Taxi’ initiative to accelerate the digitisation of taxi services in the city. According to a release in Zawya, this involves providing free Wi-Fi Internet in Dubai taxis and a package of digital services to taxi riders. The digital services supports the smart city drive, under which the e-hailing taxi service ‘Hala’ in conjunction with Careem was launched recently.

He explained that once connected, the rider can log-on to www.taxiconnect.ae to access an array of digital services.

“One of the available options on the digital services enable communication with the driver using instant interpretation of the passenger’s language to the driver’s selected language displayed on the meter screen,” he added.

Additionally, Tech Taxi initiative also allows the passenger to track the path of the journey and share the map with his/her relatives or associates. One of the other services includes briefing riders on the current market exchange rates for converting various currencies to UAE dirhams. The rider can also click another option to rate the performance of the driver and capture the taxi meter screen on his or her phone. Another icon was designed to measure the rider’s satisfaction/happiness with the service.

“This initiative is the first of its kind worldwide. It offers a range of consolidated digital services under one link. It epitomises the keenness of Dubai Government to realise the Smart City initiative as well as several strategic goals of RTA namely – Smart Dubai, People Happiness and Advance RTA,” said Al Awadi.

Prev Next 1 of 416
Popular Topics
Tweets by CxoMe